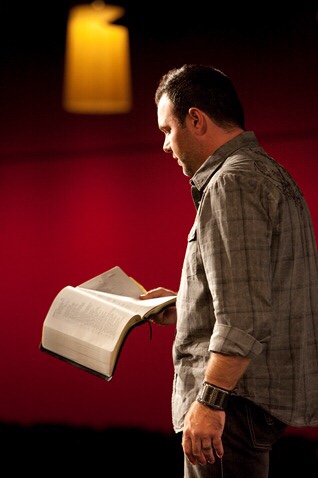 For me, it was 2003 and a hot young chick I was totally into, sent me a link to sermon to check out. So, I checked it out and at first, I didn’t like it, but if it impressed this girl, then whatever. The reason I didn’t like it, is because the guy preaching kept describing me in very unflattering terms. There were reasons I lived in my mom’s basement and didn’t have a car or a job. Yeah, so, I was 23 and had no idea what I wanted to do when I grew up, but I had no intention of growing up. And no, my intentions with that young woman were not honorable. I kept listening, at first, because it pissed me off. Then I hopped on a bus and headed there one Sunday morning, hoping to run into the hot girl.

That led to more and more visits. I would stay out in Ballard all Sunday. I got bored waiting between the services, so I started to volunteer. That led to a community group. I got a job and a car; taking the bus from Renton to Ballard took over two hours. I made plans to move out of my parents house. I did.

I started to admit to people that I didn’t think I was actually as ‘awesome,’ as I always tried to seem. That I had guilt and shame. They prayed for me. The hot girl gave me a bible for Easter. I read it.

Then I got really nervous. The preacher had tricked me. He challenged my very idea of what a man was and somehow lured me into all kinds of difficult work I didn’t want to do. People started asking me about the hot girl and should I be singling her out? They wanted to know what my intentions were.

And one Sunday I realized it was all a trick. The real reason the preacher described manhood the way he did was just to get me out there to Ballard, to join this cult. He kept mentioning Jesus during all his attacks on my imagined manhood. What does it have to do with Jesus? Jesus didn’t have a job or a wife. He loved and served people. He wandered around and gave advice and healed people. All this talk about responsibility and masculinity didn’t have anything to do with Jesus…..did it?

Then the dumb preacher said something I couldn’t believe. Apparently, Jesus mentioned Jonah and his fish as if it were real. What nonsense, what backward thinking nonsense! This hillbilly preacher is just stuck in the 50’s with his literal bible and mod clothes and family values.

So, I stopped going. I went to the community group still, but not church. After two Sundays, a man I knew asked me why I hadn’t been going to church. I blustered. Where did THAT guy get off? The guy told me off right there in front of the other guys.  I went back to church the very next week.

Alright preacher dude. And hot girl. And rude guy. If Jesus says Jonah was real, then the entire Old Testament is real; six day creation, burning bush, talking donkey – when did I learn all these stories – anyway – if Jesus says its true then its true because Jesus is the son of God and the son of God can’t lie…..wait, what?

I was baptized a few months later. In my baptism interview I told Bent Meyer that I wanted to be a pastor but didn’t think anyone would want someone with such a past to pastor them. Bent gripped by arm and with tears in his eyes said, “the old man who is going down into that water is never coming up again. A completely new man will rise up, and when God looks at that new man, all He is going to see is Jesus.”

I heard the preacher in a whole new light. His voice thundered every Sunday.

Here in poofdom, where it’s harder and harder to tell the difference between a man and a woman, straight and gay, evil and good – we need that voice more than ever.  We need a community built around that voice that is always preaching and teaching that same word – Jesus. We need men who lead by following Jesus and women who follow Jesus by following their man. This is a wilderness that needs that voice.

Don’t you remember? Wasn’t it glorious? It wasn’t perfect, I know, but it didn’t need to be, because we had the Gospel. But for a time there was a loud, strong, male voice, bible in hand – swinging his claymore with both hands like William Wallace II –  crushing the head of Satan in us seattleites with that one beautiful powerful word – Jesus.

There is a Sunday conscience, as well as a Sunday coat; and those who make religion a secondary concern put the coat and conscience carefully by to put on only once a week. - Charles Dickens View all posts by Michael Kloss